Those that know me know that Luol Deng has for a long time been my favourite NBA basketball star, well, not as much now he’s not with the Bulls but still… this is my favourite of his moments. It was so memorable and so exciting and came against the Pacers Game 1 of 2011 NBA Playoffs which ended with Bulls 104 Pacers 99. With the bench mob this has to be one of my favourite periods of modern Chicago Bulls. Anyway in light of the recent trending outcry about big wigs at the NBA being racist – Atlanta Hawks general manager Danny Ferry passed along comments from a scouting report saying like Luol Deng had a little African in him before all shit hitting the fan over at Atlanta.

Danny Ferry said Luol Deng had “a little bit of African in him.” Deng’s response was great: http://t.co/4XFTyvkaZF pic.twitter.com/MBGMz3DJrO

Deng’s response was as fantastic as ever. Which reminded me of what I loved about watching Deng in the Bulls. Careful, methodical, often  times quiet, but damn – fired up when it counts…

It was almost as good as watching him repeatedly school LeBron… 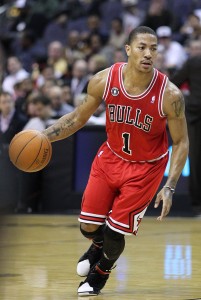