In ‘Say Yes’–season 7, episode 12 of The Walking Dead–we see Rick and Michonne discover a fallen emergency military camp whilst on the hunt for guns to use in the forthcoming fight with The Saviours. And for a moment lasting no more than five seconds we see the world, we really see the world,  as we did in the first few episodes of the show: Rick’s sadness with the zombie in the grass, the desolation he uncovers, the apocalypse-porn of the horseback trip into Atlanta.
In that we experienced a possible future, our possible future. And our morbid curiosity rewarded us with some beautiful cinematography.

The Herd of season 6, the horn of the truck, the entrapment of Rick’s group by Negan, those were beautifully envisaged scenarios, but the small stuff could be so much more poetical and philosophical than it has been. Perhaps this was a response to the wanderings in the woods that seemed to form the backbone of seasons 4 and 5, the human stories of the small groups.

The Walking Dead is still a post-apocalypse show, but the one, biggest thing that is missing is the unanswered question. The Saviours arc is strong, but the fixation is on the fight to come and it has been the whole time. The mindfulness of the wider situation is missing. It is natural that the characters have become desensitized to it, but as Michonne’s ‘something big went down here’ reaction suggests, even in this scenario there is some natural inclination to analyse situations and so it is not even particularly unrealistic to give the characters a few moments of wondering, if not just the audience.

Since an investigation into a worker being cooked alive at Bumble Bee Foods by California Division of Occupational Safety & Health, Bumble Bee Foods have changed their website to remove the following statement:

“Thriving Workplace: We contribute to a healthy, productive workplace that empowers our employees as well as our local community”. 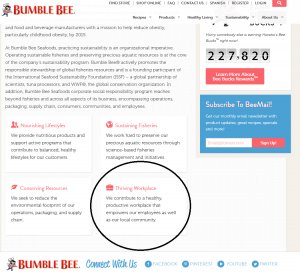 Being drunk is ok. Dead drunk is not. pic.twitter.com/mq1iSaEr1Z