Listening to Richard Spaven‘s drumming patterns on Whole Other* is like listening to the most sophisticated drum machine ever. When I say machine, what I really mean is artificial intelligence. It’s as if (this isn’t a comparison with Spaven himself, so stay with me on this one…) the ‘cloud’ or the internet has had a kid that grows to be the ‘musical’ one in the family, but no one really knows where he got it from after all its parents basically just work in database administration and file storage. It’s as if it has listened to the history of beats, has inhaled and digested all the jungle, all the jazz, all the drum and bass, all the hip hop and funk to the point that triplets run through his virtual veins and learned that somewhere in that melee is what people are expecting to hear. Only because it’s a computer it doesn’t realise the context of the progression through all those genres. It can’t understand how time and context, culture and socio-economics have shaped what we listen to. So when it sits down to play at its end of term recital people just sit and stare, gobsmacked and try to understand what they just experienced. By the way, if you haven’t yet seen “The Evolution of Western Dance Music!” you must – it’s quite spectacular.

When I first started listening I had no idea what to expect, I’d seen him drumming for José James and Kris Bowers (as mentioned in this post on Takuya Kuroda at Love Supreme 2014) and so when I bought the fifth ever copy that was sold (before the release on Monday) I literally had no idea what it would sound like. When I put it in my laptop when home I started hearing Roni Size & Reprazent’s Mercury Music Prize winning album New Forms and jazz legend Herbie Hancock’s Future 2 Future an album which, despite having its criticisms I really liked. One of the main reasons I love Future 2 Future is the live drumming (where it is live) and how sonically full the hits are. Whole Other* is the exact opposite of that. I started wanting to hear sibilance in both ears at the edges of the sonic spectrum and started disliking how this drummer with such a talent has confined himself to the centre of the spectrum. Then I realised what it had reminded me of the whole time and I ‘got’ it… 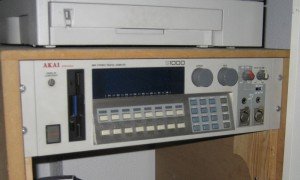 The Akai samplers, the S1000 sampler and the S series in general that ‘paved the way’ for jungle. In a lot of the tracks I hear what a drummer would play were they to recreate some of the splices used in dance, jungle and breakbeat musics through the ages. Recognise this?

Not sure if this is the original Terrorist but it’s a good example of the break and it gets into that sample quickly:

Organic (organicbeats.co.uk) has a great article on this tradition and the Who Sampled blog has a great list of famous sampled breaks.

I’m overstating it somewhat but really, should that connection hold up, what a strange thing for live drums to sound like, yet when you think about it, what a natural thing contemporarily speaking. London Elektricity did something a little like this in the live set they were doing ahead of the game back in the day (incidentally I do hear a slight Seba and Paradox style and vibe in Whole Other*). Musical generations have come and gone and in the evolution of everything those splices really resonate. So how to (paraphrasing Coltrane) “activate our ears” to make live rhythm mean something in the era where computers can do it all? Well, know your trade, perfect your skills and play deliberately is what Spaven seems to be saying with Whole Other*.

This is an extremely cerebral album. Expect interesting time signatures not ground-shaking drops.

By the time our attention is warmed up with scintillating hi-hats and bass modulations of Assemble (intro) with the trumpet of Takuya Kuroda we get the wonderful down-tempo electronica soul of The Hics featuring on the title track Whole Other* provoking a head nodding and foot tapping with layered harmonies from vocal line to self-harmony to synth and pad. In both tracks all instruments speak with a similar disjointed understanding of why. That aforementioned scattered absorption of music mentioned at the start of the article. The what is fine. The why is fractured, so the how becomes… incredible!

Taj is frustrating me – I hear something that I recognise but I can’t put my finger on what. It’s got such a coolness though. I know I’m laying the Herbie Hancock references on thick at the minute but something about it reminds me of Maiden Voyage off the album of the same name.

It has this feel of a tide persistently washing its harmonies over the shore whilst the sea itself has all this crazy stuff stuff going on. Much of the album has that feeling. I would like to assert that it’s unconventional but to be honest I’m so out of touch with the boundary pushing sides of jazz and electronic music nowadays that it might not be. It sort of sounds a bit like Flying Lotus but without the hip hop heaviness or the sort of thing Gilles Peterson plays. It feels far more organic and jam-like.

SideIISide has some nice sub and occasionally squelchy bass with the same typical slightly tremelo’ed Rhodes sound that permeates electronic of this style and substance the vocals are a particularly well produced headphone moment and a particularly strong moment is the simple yet brilliant fill/ intro of the lyrics at 2:36, it really is shit hot yet effortlessly cool. There are some great moments of production which Spaven took on himself, those little touches that tell a story of the hours spent honing it.

Tribute continues with that same persistent but not forceful soulful and freestyle sound. You realise the hooks are there all along but they’re subtle, for instance in Tribute it’s this pizzicato sounding triplet thing that happens continuously in the undercurrent whilst a rubbery wash of guitar sits atop, a guitar sound that reminds me of nineties Pat Metheny – sort of quite compressed but that breathes through the reverb. It almost sits in the middle of the album like filler but it’s just so not filler, it’s so understated that it’s like a jam that if it weren’t recorded no one would ever have known about.

The Look Out features a sample from Stuart McCallum‘s Indigenous which might explain why this track enters with a real statement that the others do not. We’re straight into business with The Look Out and that’s a sign that the artist really deliberately understands what they’re trying to express as a whole. Where a lesser producer might repeat an unrealised habit Spaven subverts. Much like the recently reviewed and similarly loved Midnight Radio by Renu, Spaven is (what is quickly becoming a new favourite of mine, apparently) a rhythm player who produces. So whilst he could go nuts on a technical drumming showcase he understands what it means to support, musically, and so this whole album plays as music, rather than instruments.

Then we have a cover of prolific Brazillian Egberto Gismonti’s Bianca (original below) which plays like a soundtrack piece.

Closure is a surprisingly dark toned tune with Kutmah, that plays in a far more conventional electronic style with a more conventional syncopated rock rhythm in what is, for want of a better word, the verses. The synth and distorted layers push through the compression in quite an unsettling way before we’re rescued by a synth pad and bass chorus (instrumental throughout) with that familiar Spaven freestyle sound on the rhythm, before breaking back into that ear bleeding verse sound which sees punches of (possibly) arpeggiated synth coming to the front with, later, a wicked close studio sounding reverb.

Speedbird is a total counter point to that, breaking in straight away with one of the aforementioned anti-hooks being little trills on the main guitar riff as well as a harmonic structure that plays like that ‘here is the sun after the end of our journey together’, end-of-the-album tune, the tune that accompanies the credits to the film with similarly reflective and pensive modulations and well, there we are. Quite a musical journey (shit, did I just say that?)

This is a bloody tidy album that deserves wide attention, one of my favourites of the year so far.

Tory MP for Boston and Skegness, Lincolnshire and Foreign Office, Africa minister Mark Simmonds has declared he has quit (but won’t stand down until the 2015 election). The minister earning £89,435 who pays his wife £25,000 of public money and has a rental allowance of £27,875 plus 3x £2,500 for his children and who has received £500,000 in expenses all of which are paid by taxpayers is quitting as minister and stepping down at the next general election. His reasons are noble – in summary – that he cannot install his family in a location close enough to his work to allow him to be a good father and husband. In reality he is claiming that he is entitled to more than the aforementioned. That he is entitled to things that ‘hard working families’ trying to keep afloat in the capital are not. Another irony?

Here’s his voting patterns on benefits: 1.

He obviously feels he is entitled to more than me and probably more than you. That for some reason, the taxpayers should stump up more money to allow him to take his (presumably rather comfortable) lifestyle into London (and presumably that’s as a second home).

And they ask why the UK electorate are disillusioned with modern politicians.

[1] How Mark Simmonds voted on Welfare and Benefits