Blue Note Records is 75. It is a true trunk in music history, as iconic as the 1970s punk movement, as enduring as The Beatles and as stylish as House music. Whilst nowadays, and on their 75th anniversary, they’re owned by the Universal Music Group, on its founding it was recording traditional and small band swing. 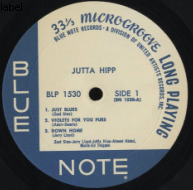 One of the original pressings were in black and pink because of an error by the printers (it was supposed to be blue and magenta). Apparently, those original records are worth a fortune nowadays – oh the irony. Blue Note did not miss out its share of difficulties. Corporate acquisitions happened, founders left, artistic integrity was questioned and I can’t say I have even one album on my shelves released between 1970 and 2000. Whilst it once held a part of the pie in what, really, was popular music, the label seems (in retrospect) to have at that time been an artefact of the previous generation. Soul was king and then was hip hop. Culturally the label has ridden a tough wave but endured.

The label came back into vogue after the generational counter-cultural reactionary movements by way of the mid 1990s acid jazz movement characterised by bands like Brand New Heavies (think compressed drum machines and slightly too much reverb) and the band US3 (whom sampled Herbie Hancocks famous piano riff from Cantaloupe Island which I have to be controversial and say sounds better there than in the original context).

Hip hop producers were never far from sampling that generation with artists from Tribe Called Quest to Jay-Z stopping by to sample.

It was not just hip hop that sampled the back catalogue though. St Germain had the doors thrown open and the brilliant lounge-y electro album Tourist sees a complete album based on some brilliant stuff in the Blue Note Records archives in a period of time where the vogue was heralded by artists like Kruder & Dorfmeister who created lushious stoned electro in Vienna.

Blue Note Records have always had the ability to be relevant. Alongside these releases the Rudy Van Gelder remasters of classic Blue Note Records albums on CD at affordable prices in trendy stores like Fopp kept that ball rolling and perhaps more importantly, expanded the cultural ‘ownership’ away from a middle-class middle-aged audience (whom must have kept the label alive in the wilderness years – kudos) into the pockets of a younger audience.

In Febuary 2002 Norah Jones’ debut “Come Away with Me” was single handedly responsible for melting this (then) 16 year old boy’s heart and causing him to fall hopelessly in love with her smokey, ageless voice and brown-eyed beauty (and many hundreds of thousands of others with its 26 million copies sold).

Madlib’s “Shades of Blue” pushed further the revival of the label’s spirit and image, pushing past a lot of irrelevance. Artists like Robert Glasper and Jose James have managed to straddle the fence dividing the purist and the contemporary crowds, perhaps by not being that high in the mainstream’s attention. Though for that see Gregory Porter – he has had a real surge into the mainstream largely thanks to a wonderfully acceptable image of being simultaneously twee yet self-aware, plus a writer and performer of such beautiful music. That brings us to my most favoured recent jazz album Rising Son by Takuya Kuroda an artist with as much money making potential (being Japanese born and NYC educated) as he has style and skill.

The one thing I always felt was slightly strange about Blue Note Records was that despite having the most supremely talented jazz musicians in history gracing their discography none of three or four of the most historic, era defining, and widely known jazz albums were released by the label: A Kind of Blue by Miles Davis (Colombia, 1959); A Love Supreme by John Coltrane (Impulse! Records, 1964); Time Out by Dave Brubeck (Colombia, 1959); and Head Hunters by Herbie Hancock (Colombia, 1973). So the legacy is rather strange. The widely recognised and cult cover art and the focus on jazz when other successul labels like Colombia did not, belies the lack of historic figure-head albums. Yet something about the label just says timeless and probably always will. Perhaps it is simply because of its focus and integrity at the right time. (For the most part) it is not style over substance, either.

Some of my favourite Blue Note Records albums: